We are less than one week away from the Royal Wedding, and I don’t know about you, but I am already hungry. When planning our menu, there was really only one sufficiently British option – a traditional tea! If you’ve never been to a real British tea, then you might think it is exactly what it sounds like. A cup of Lipton’s, and maybe a hard cookie for dipping. Well, I hate to disappoint you, but you could NOT BE MORE WRONG.

A traditional British afternoon tea usually comes with three courses (hopefully served on a fancy three-tiered serving tower). The top is usually scones, middle is sandwiches, and bottom is desserts. Sounds simple enough, right? Well, depends on where you’re dining (tea-ing?). A simple service could cost less than $12, and be limited to just a few of those items per person. From that low bar, things just get fancier and fancier, until the next thing you know, you’re at the Savoy, sipping champagne, eating unlimited petit fours, listening to the live pianist, and wondering how much 79 pounds is in American dollars. 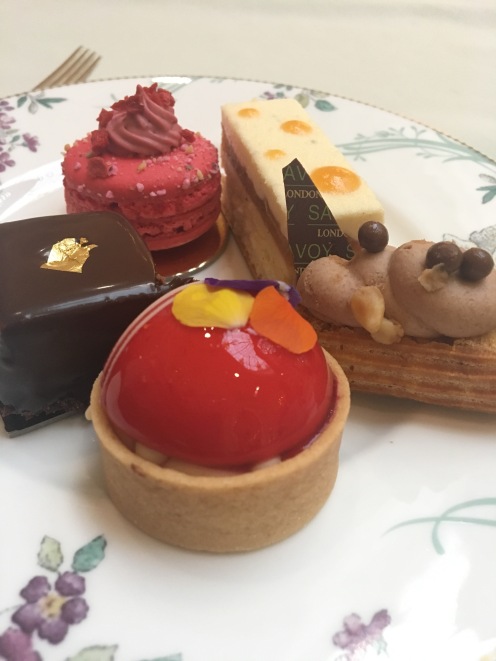 We’ve assembled some of our favorite recipes (and some we haven’t tried yet) into a sample menu for you to replicate below. The best thing about this type of catering is that it looks SO much fancier than it really is. An egg salad sandwich isn’t usually the height of elegance, but trim the crusts off and cut it into finger-food sized pieces, and suddenly the Queen herself is envious of your spread.

If this post just whet your appetite and you want to go further into the rabbit hole, I encourage you to check my favorite reference book, the aptly named Vintage Tea Party.